Bolt-action, lever-action, semi-automatic—what do they all mean?

Your rifle’s action determines what type of gun it is and how it works. There are many types of actions out there, each one with its own advantages and disadvantages. Some are better for hunting and others are better for precision shooting.

Each type of action has enough intricacies to merit its own article, but the information below is enough to make you more knowledgeable than the average gun-owner.

What is an action? The action is the part that contains most or all of the moving parts of a firearm. It handles the ammunition, from loading to firing to extraction and ejection.

The gun’s barrel is in front of the action. The parts of an action may include the following:

Not all rifle types have all of these parts. For example, you only see dust covers on semi-auto guns, and break-action rifles don’t have bolts. But if any of these parts exist, they’re part of the action.

Break-action rifles, much like break-action shotguns, are a single-shot action with a hinge in the receiver. When unlocked, the barrel(s) pivot downward to eject the spent cartridge and allow you to load a new one.

This type of action is the most compact and lightweight. They are also simple and easy to make while being rigid and accurate. Break-action rifles have two main disadvantages, though. The first is that they are slow to reload.

The second is that you need to move the entire gun to load another shot, so you have to start over aiming for every shot, even when shooting from the bench!

Also, break-action latches can wear over time, loosening up and making the hinge sloppy. 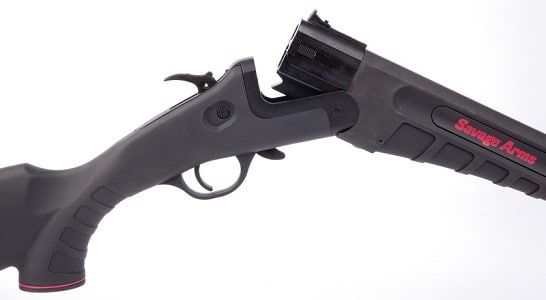 A couple examples are the Sharps Rifle and Ruger No. 1.

Perhaps the most common rifle action is the bolt action, and for good reason.

Bolt-action rifles have a metal receiver surrounding a bolt, which is locked to the barrel using lugs. There is handle on the side of the bolt that is lifted then pulled back to open the breech. It is then pushed forward and down to chamber the round.

With practice, this can be done extremely quickly and without losing your sight picture.

These rifles can be single shot or they can hold a magazine, either internal or detachable, for firing multiple rounds before reloading. Bolt-action rifles can be chambered in rounds from .22 long rifle to heavy-hitting elephant cartridges.

You can use a bolt-action rifle in most stances without having to move the entire rifle for each shot. Also, the receiver is quite rigid, so bolt-actions are inherently more accurate than most other types of rifles. Only falling-block actions are more rigid.

These advantages mean that bolt-action rifles are excellent for everyone, including children learning to shoot, hunters, long-range competitors, and military snipers.

Their main disadvantage is their firing rate and magazine capacity, which is not actually a concern for most civilian uses. Also, most bolt-action rifles are not ambidextrous.

Some examples are the Lee-Enfield, Mauser 98, Remington 700, Ruger M77, and Savage Axis.

Lever-action rifles maintain the cowboy mystique. To cycle the action, you move a lever down and forward then back to the closed position. This moves the bolt rearward, pulls a round from the magazine, and loads the cartridge into the chamber.

This is faster than a bolt-action rifle, especially since the trigger finger basically moves back into position when the lever is closed. However, lever-actions receivers tend to not be as rigid as bolt-action receivers, and the lever makes bench shooting difficult.

The magazine is almost always a tube which you have to load one round at a time. Also, the front of one bullet presses against the primer on the next, so you cannot load pointy bullets into a lever-action rifle’s magazine.

That is, unless they have a soft polymer tip, such as Hornady’s LEVERevolution ammunition.

Because of these factors, lever-action rifles are most often designed for shorter range work. They are still excellent hunting weapons and are plenty of fun to plink with.

Examples include the Henry Big Boy, Marlin 1895, and Winchester 94.

Pump-action rifles are less common than other rifle actions, but they are still notable.

In pump-action rifles, the forend is connected to the bolt. All you have to do to load the next round is to pump the forend backward then forward. This makes pump actions the fastest manual rifle action.

Pump-action rifles can be fed from a tubular magazine or from a detachable box magazine. Sometimes, bolt-action rifles are also called “slide-action” or “trombone-action.”

Some pump-action rifle examples include the Henry Repeating Arms Octagon and Remington Model 7600.

Some rifles use either recoil or the energy from rapidly expanding gas to cycle the action and load the next round. These are called autoloading rifles, and they can be semi-automatic or fully-automatic.

Semi-auto rifles have a disconnector, which prevents the hammer from following the bolt and striking the primer as soon as the next round is chambered. Fully-automatic rifles can fire for as long as the trigger is held down.

“Select-fire” rifles can select between those options or burst-mode, which “counts” several cycles while the trigger is held before the disconnector stops the gun from continuing to fire.

The simplest semi-auto action is a blowback action. The recoil from the shot is used to push the bolt backward enough to eject the old round and load in the next. This works well with lighter ammo such as the .22 long rifle but doesn’t scale well with heavier-recoiling ammo (because more recoil requires a much heavier bolt).

A delayed blowback system allows for stronger cartridges without using massive bolts, but this too can only scale up so far.

Examples include the Ruger 10/22, FAMAS, and KRISS Vector.

Gas-operated autoloading rifles use the energy from expanding gases that propel the bullet to also cycle the bolt back and eject the spent round. A spring then pushes the bolt back forward to load the next round.

The most common gas-operated action uses a piston. Gas from the barrel pushes on a piston or op rod, which pushes against the bolt. There are both long and short-stroke pistons.

Piston actions are reliable but involve a lot of moving mass, so recoil can make them less accurate than other rifle types. Since the piston is not in line with the barrel’s bore, the recoil does not travel straight back. This does not make piston rifles inaccurate, just not as inherently accurate as other types. A few gas-operated rifles do away with the piston and send the gas to act directly upon the bolt itself. This is called direct impingement and greatly minimizes the amount of moving mass, which means that recoil is mostly straight back.

The disadvantage of direct impingement rifles is that gas is directed into the action itself and causes increased fouling.

The prototypical direct impingement rifle is the M16 and its derivatives such as the AR-15. Any autoloading action can be fully-automatic with an auto sear. Autoloaders can also be open-bolt or closed-bolt.

Open-bolt is a simple design where the bolt is held to the rear when the gun is ready to fire. When the trigger is pulled the bolt slams forward, loading the cartridge and firing in one go.

Closed-bolt rifles have the bolt forward when ready to fire. This makes them more accurate because there’s less time between pulling the trigger and firing the gun.

Because open-bolt rifles are more easily converted to full-auto, the ATF requires all semi-auto rifles in the US to be closed-bolt.

Which rifle action is most accurate? While any rifle should be accurate for most shooters, there is a difference in inherent accuracy between different actions.

By alignment, I’m referring to tight tolerances for the bolt face, bolt lugs, receiver threads, and any other machined parts on your rifle. The tighter everything fits, the more consistent it’ll be for every shot.

But alignment depends more on the manufacturer and any aftermarket “blueprinting” than the action type (although semi-automatic rifles tend to have looser tolerances than other rifle types).

Rigidity is the number one factor that makes an action accurate. Rigid actions don’t flex when you fire the rifle, and so it’ll be more accurate. Fewer moving parts and more metal makes a receiver more rigid.

Single-shot rifles such as break action and falling-block actions are the most accurate because very little of the receiver moves, followed by bolt actions, lever actions, pump actions, and semi-automatic rifles in descending order.

Movement after firing applies to semi-automatic rifles because they start to cycle before the bullet has left the barrel. A piston slamming around moves the gun quite a bit, so this can hurt accuracy!

The most accurate semi-automatic firearms are direct impingement because they contain the least amount of moving mass to cycle the action.

Of course, your ammunition, barrel, trigger, stance, and marksmanship all also affect accuracy.

What type of rifle should I use for hunting?

As long as your rifle is chambered with a cartridge capable of effectively taking the animal you want to hunt, every type of rifle action works for hunting. If you only take good shots (which you should do in the first place), you’ll only ever need one.

If you’re going to hunt animals at long range, such as when hunting mountain goats, I would recommend a bolt-action or single-shot rifle for utmost accuracy.

However, if you’re hunting dangerous animals such as bears or hogs, a semi-automatic firearm is a good choice. Those animals tend to be tough and may attack when provoked. Manually actuating the rifle takes precious time.

Keep in mind, though, that you can’t miss fast enough to stop a charging bear. Make every shot count.

What do “short action” and “long action” mean?

Some bolt-action rifles, such as the Marlin X7 and Remington 700, come in both short-action and long-action configurations.

This only really comes up when you want to rebarrel the rifle. For example, if you want rebarrel a bolt-action rifle to fire .270 Winchester, you’ll need a long-action rifle.

Short-action cartridges, from the .17 Remington to 7mm-08, can fit in either short or long actions. Typically you’ll want to use a short action if possible because shorter actions will be more rigid, but they’ll work in a long action too. Looking To Build An AK-47 At Home? We Show You How… The Ultimate Guide to Cleaning Your Rifle: When, How & With What?