AR-15 rifles are rapidly becoming the most popular rifle in America.

They are light, customizable, easy to use, and can be very expensive or very inexpensive. There’s an AR-15-style gun to meet everyone’s tastes.

There’s a stigma against the AR-15 that it’s not a good hunting rifle. Two stigmas, in fact:

However, the AR-15 is actually a great hunting rifle when used properly.

Two main factors are at play here. The first is the gun itself, and the second is the cartridge which it shoots.

Let’s look at those in detail.

Hunting with the AR Platform

Though Colt holds onto the AR-15 trademark (“AR” stands for “ArmaLite Rifle”), the rest of the gun is not patented. This means that anybody can make their own AR-15-style rifle and modify the parts how they choose.

This has led to an explosion in options, which is a big part of why AR-15s are so popular right now.

As for hunting, though, AR-15-style rifles have several advantages over traditional hunting rifles and even other semi-auto rifles. Juneau, Alaska, is in a temperate rainforest. It rains two-thirds of the year, and that doesn’t include snow days!

When you head into the mountains and forests around Juneau, you need to have a firearm that can hold up to rainfall, humidity, and the oceanic climate.

My hunting AR has spent days tromping up and down Mount Meek on Douglas Island, where there’s a grotto loved by the local Sitka black-tailed deer.

It’s rained every trip, yet my rifle remains uncorroded.

AR-15s are made from advanced materials—aluminum and polymers—which don’t care about the rain. Where there is steel, that steel is protected by advanced coatings, such as Melonite, nitrides, and chrome plating that keeps the water away.

The only parts that ever rusted were screws, nothing critical.

An AR-15 can handle any environment you throw at it. You’ll have a comfortable time throwing it, too!

Modern sporting rifles are lighter than the hunting rifles of yesteryear. My hunting AR weighs under 8 pounds with scope and magazine. My friend’s Remington 700 weighs a little over 8 pounds.

With the different pistol grips available (I prefer the Magpul K2+) and adjustable stocks, you can get even a cheap AR to fit you perfectly.

When you consider foregrips and the many potential sling locations, you can find a way to carry an AR-15 without discomfort even when climbing a mountain.

Then, when you shoulder the gun to take the shot, it’ll work with your biomechanics for the utmost in accuracy. 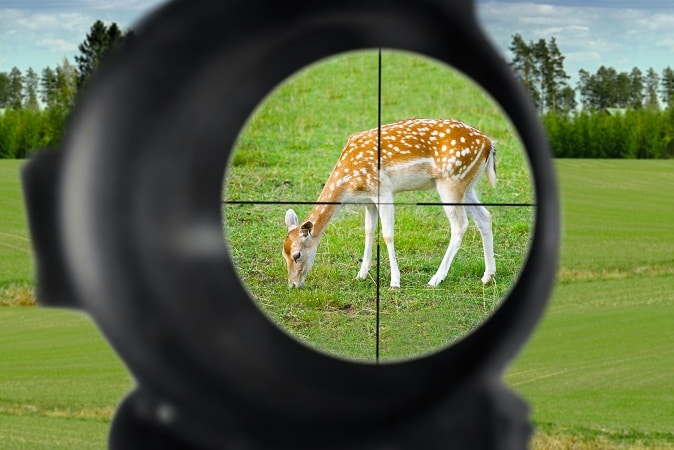 Semi-automatic rifles move when you pull the trigger because of the reciprocating mass bouncing around inside the action.

However, AR-15-style rifles generally use direct impingement (DI) rather than a gas piston design.

DI rifles guide the gas to push directly on the bolt carrier. This is a small amount of mass that moves directly in line with the bore.

Gas piston rifles, however, have a heavy piston off the bore line that shoves the gun around. This detracts from accuracy.

Good AR-15s are capable of sub-MOA accuracy. Without getting too technical, the gun will be capable of consistent groups under 1 inch at 100 yards.

Are you that good of a shot?

Basically, even a cheap AR will be more than accurate enough to hit an animal’s vitals at 300 yards or more. All that said, most people’s complaints against AR hunting is the cartridge.

AR-15-style rifles are typically chambered in 5.56 x 45 NATO or .223 Remington. They only have a hair’s difference separating them, so for brevity’s sake I’ll just use the term 5.56; it has slightly more oomph than the equivalent .223 loading.

Let’s address the elephant in the room:

To some people, this means “super person-killing round.”

However, the primary reason why the US military adopted 5.56 was its weight. It’s lighter than the 7.62 x 39 ammo carried by Soviet soldiers at the time, so US soldiers could carry more.

In fact, you can’t hunt deer with the standard AR-15 round in some states because it’s considered too weak for deer hunting!

Sure, it goes fast, but the common 55-grain pill is extremely light. A .30-30 Winchester, which has probably taken more deer than any other round, is 110 grains at its lightest.

Let’s look at what you can hunt with this lightweight, high-velocity cartridge.

Varmints are small animals which can cause damage to property, better known to non-hunters as vermin.

Think animals such as crows, woodchucks, and prairie dogs.

5.56 shoots fast and flat, which makes it excellent for taking out small animals at long ranges.

Small game, such as mountain goats and sheep, is hunted the same way.

Yeah, that’s not in dispute, but it’s worth pointing out. Not all hunting is deer hunting. 5.56 is also a great coyote-hunting cartridge.

With practice, you can be accurate to a range of 500 yards or more. Coyote hunting can occur at ranges from 30 to 300 yards, well within the 5.56’s potential.

It’ll hit the coyote hard enough to kill it but won’t mess up the fur as much as heavier cartridges. Perhaps the most commonly hunted animal with 5.56 is the feral pig.

Destructive and aggressive, hogs are not to be hunted lightly. You want something with enough power to put them down because a wounded boar WILL come to enact vengeance on you!

Since they are easy to use and have good ergonomics, you’ll be able to aim at rapidly moving pigs.

Also, most AR magazines carry 30 rounds. This gives you quick follow up shots. Those are a necessity if that boar decides to charge you!

Many have fallen to this cartridge, though, leading some people think 5.56 is slightly underpowered against hogs. The 55-grain 5.56 lacks the oomph necessary to put down a deer unless your shot placement is superb.

You should always aim as perfectly as possible. However, nature loves throwing off your perfect aim.

I hunted smaller-than-average deer with the heaviest bullets I could get.

Both a 75-grain or 77-grain 5.56 is powerful enough to put down a deer, even without perfect aim. You do want to use hunting bullets, not match bullets, which can make finding the ammo difficult. But it’s not impossible.

Also, that was against Sitka black-tailed deer, which are on the smaller end. Against Kansan Whitetail deer, I wouldn’t use 77-grain 5.56 even if I legally could.

What about bigger animals? I wouldn’t hunt anything larger than a medium deer with any 5.56 load.

Juneau is bear country. I always hunted with a partner, one armed with an appropriately-sized bear round.

That doesn’t mean you can’t hunt them with an AR-15-style rifle, though! Part of the AR-15’s brilliance is a cleaning feature.

The upper receiver holds the barrel, bolt, and optics, all attached together.

This means it can take 10 seconds to change your coyote gun into a bear gun, provided you own several different uppers.

So, want to turn your AR-15 into a specialized hunting rifle? Consider building or buying extra uppers chambered in the following cartridges! AR-15-style rifles are fully capable of taking grizzly bear and moose when chambered in a heavy-hitting, high-caliber cartridge such as .458 SOCOM. These cartridges are similar to older cartridges often used for hunting large game, such as the .45-70 Government.

These rounds turn your AR-15 into a thumper. They hit hard enough to ethically take any game deer-sized or larger. And, if you don’t put down the bear with the first shot, you’ll have fast follow-up shots without needing to work a bolt.

You can use them against smaller animals, but there won’t be much left… When I upgraded my hunting AR, I built a .300 Blackout upper. My goal? To hunt deer in Alaska’s dense forests.

The .300 Blackout round is sort of a specialty hunting round. Originally designed for subsonic use, the supersonic .300 BLK closely replicates 7.62 x 39 or .30–30’s ballistic performance.

However, the .300 BLK is more efficient than either 7.62 x 39 or 5.56 in shorter barrels. This means you can make an AR-15 pistol or short-barreled rifle without losing your ability to effectively put down a deer, making for excellent hunting guns in difficult terrain.

The .300 Blackout is also excellent for nighttime hunting, such as controlling coyote or feral pig populations. A suppressed .300 Blackout matches perfectly with night-vision equipment. Subsonic .300 BLK isn’t good for deer, but it’s capable enough against hogs and smaller animals.

If you plan on hunting with a rifle-length upper (not an AR pistol) and with only supersonic ammunition, then the 7.62 x 39 is a good choice. The ammo is cheaper than .300 Blackout ammo, too. On the other end of things, you can turn your AR-15 into a long-range hunting rifle by adding a 6.5 Grendel or 6.8 SPC upper.

Both of those rounds are capable of accurate shots at ranges in excess of 300 yards. A 6.5 Grendel out of a 16-inch barrel, for example, stays supersonic past 1,000 yards!

I wouldn’t hunt at such an extreme range, but it shows how well these bullets retain their velocity.

These intermediate cartridges can take down larger game than a 5.56 cartridge, but they aren’t as powerful as, say, a .458 SOCOM.

So, if you want to hunt deer or black bear, the 6.5 Grendel is an excellent choice. It’s also good against coyotes and hogs, but I’d want backup when hunting Grizzly bears. But what about rabbits and squirrels? Or raccoons and other deleterious small wildlife?

You can tailor your AR-15 to hunt these small animals, too! .22lr is good for animals this small.

It’s accurate over short distances and is much quieter than any centerfire round.

I would advise you to avoid using a drop-in .22lr conversion kit, though.

The 5.56 may be a .22 caliber weapon, but 5.56 barrels have a much faster twist rate than .22lr barrels. The faster twist stabilizes heavier 5.56 projectiles but won’t stabilize lighter .22lr bullets.

However, .22lr-dedicated barrels and BCGs are not difficult to find.

Just make sure to use high-velocity .22; the weaker ammo will cause a .22lr AR to jam.

They are accurate, lightweight, and weather resistant. You can change the ergonomics for utmost comfort.

Most importantly, you can change the upper receiver to match the animal you’re hunting.

With a handful of uppers and one lower receiver, you can hunt everything from squirrel to moose with one gun. No need to learn a different trigger or get used to a different stock.

Add a bipod and small magazine for long-range hunting, or load a standard-capacity magazine when you need to protect yourself against dangerous game.

One hunting AR is cheaper than buying separate small, medium, and large game rifles, and it travels easier, too! How to Use and Care for Different Types Of Knife Sharpeners?