Pistols can be difficult to shoot accurately. They lack a stock, which prevents you from hold them against your torso for stability. It’s all up to your hands.

In reality, the rest of your body has a large impact on pistol handling. With a good stance, the sights will waver less and you’ll recover from recoil and get on target quickly.

There are multiple stances you can use when shooting a pistol, but none of them are perfect for every person or every situation. Handguns are often used in dynamic situations, so it’s good to be practiced in multiple stances.

We’ll start with the two-handed stances and then cover several stances that you can use with only one hand.

In every stance below, it is important to keep your wrists locked. Limp-wristing can cause semi-automatic handguns to jam.

Make sure to also check our article on rifle shooting stances. 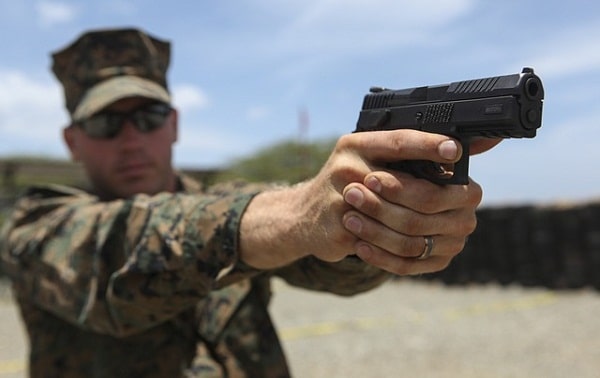 If at all possible, always use two hands to control your pistol!

All of the stances below have something in common: lean into the gun!

Putting your upper body weight forward helps you brace against recoil and gives you more control over the firearm. Leaning back may seem easier when you are adapting to the weight of a gun, but this will put you in a position where you can easily lose your balance.

Los Angeles County Deputy Sheriff Jack Weaver developed the Weaver stance. It quickly became the most commonly used two-handed stance, though it has recently been overtaken by the Isosceles stance. It’s still a dynamic stance that’s good to learn.

Face your target and hold the pistol with both hands. Put your support-side foot slightly forward, about 8 to 10 inches, with your toes pointing at your target. Your strong-side foot should point 45 degrees to the side.

Don’t forget to lean your torso forward as well! This is a fast, dynamic stance. You don’t have to move your feet to engage different targets, merely swing your torso around. The sights are also closer than with some of the other two-handed stances, so target acquisition is easier.

The problem with the Weaver stance is that it does not control recoil as well as other stances. If you don’t have much upper body strength, it can be difficult to acquire targets as quickly as you can with other stances. Also, it’s not as good for cross-eye dominant shooters. The Chapman Stance, also known as the modified Weaver stance, may be better for some shooters. It was designed by Ray Chapman to fix some of the problems with the Weaver stance.

You will use the same foot position as the Weaver stance, but bring the support foot back a little bit.

The main differences are in the arms. Instead of pushing your strong arm forward, straighten and lock your elbow so your strong arm is as straight and immobile as possible. Your support shoulder should not push forward but keep pulling back with the support hand.

You can even put your chin or cheek against your strong-side bicep for a more stable sight picture.

The downside of the Chapman stance is that it’s not as dynamic as the Weaver stance. That’s not just a fancy word; it’s harder to swivel to face new targets in this stance. Also, the pistol’s sights are a little further away and thus slightly harder to see. Face your target and keep your shoulders level with each other. Extend both arms with locked elbows, holding the pistol in line with the center of your chest. Push forward with your strong hand and pull back with your support hand.

From overhead, this should look like an isosceles triangle, hence the name of the stance.

This keeps you better braced in case something comes along and tries to knock you over.

This stance is the best for recoil control. If you know a pistol shooting stance that gets you back on target faster, let me know!

It’s also great for people who are cross-eye dominant.

The Isosceles stance is more dynamic than the Chapman stance but not as dynamic as the Weaver stance. You can’t pivot quite as far in either direction.

You also have to stick your gun far out in front of you, making this stance a poor choice for close-in fighting.

The CAR stance was designed to get you on target quickly at close range while keeping your gun close to your body. It can be used even when you can’t stand up, such as in a vehicle.

There are two positions in the CAR stance: high and extended. The high position is used for confined spaces or for quick action from a holster. The extended position is for more accurate fire.

The CAR stance does not pay attention to how your feet are situated because you will not have time to get your feet into a “proper” position during a gunfight.

Despite its name, the high position is relatively low on the body.

To get into the high position, turn your support shoulder toward the target. Draw your gun with your strong hand and bring it up to your chest. Use your support hand to move any clothing out of the way, then place it on the gun as well.

When in position, your torso should be about 45 degrees from the target and both of your wrists should be held firmly against your chest. Your elbows should flare out, ready to move into the extended position—or strike against anyone who get too close.

The extended position comes after the high position. Drop your support elbow down to your belly and raise your strong elbow to the side. This will bring your pistol’s sights up to your eyes while keeping everything close to your body. The gun will be at an angle, which is good for recoil control.

This stance excels at close-range fighting where your targets are man-sized. It is fast and adapts to any situation.

The CAR stance suffers at ranges longer than 10 yards. However, it isn’t too difficult to push your arms out and square your shoulders to get into the Power Isosceles stance. Though two-handed stances are preferred, you may not always be able to get into such a stance. Maybe you’re carrying something with your support hand, or it was injured in some way.

That being said, it’s a good idea to learn how to accurately fire a pistol with one hand before it becomes a requirement. This is the first one-handed pistol shooting stance developed. It used to be taught to military personnel before the Weaver stance was developed.

Though it is now obsolete, it is still an accurate stance when slow fire is acceptable, such as at the firing range. It’s also the only stance where you do not lean into the gun.

Stand up straight, perpendicular to the target. Hold the gun in your strong hand. Raise the gun above your shoulders, then drop until your shoulders and arm form a line pointing straight at your target. Look down the sights and pull the trigger. Let the recoil raise your forearm while keeping your upper arm straight.

This is the most accurate one-handed stance. In fact, it is recommended for Bullseye competition shooting, which can involve an 8-inch target at 50 yards. No mean feat for a pistol!

The Bladed Stance is slow, both in terms of target acquisition and recovering from each shot. It’s a poor choice for dynamic shooting.

A much better choice for one-handed shooting when speed is necessary is the Power Point Stance.

Point the gun at the target with your elbow slightly bent. Squeeze the muscles in your arm to prepare for the recoil, then pull the trigger.

The Power Point Stance is much faster than the Bladed Stance and can be used in more situations than only at the range.

This stance is not as accurate as the Bladed Stance. This last stance is for self-defense purposes and is not of much use at the range. It minimizes the ability of attackers to disarm you, hence the name.

Turn your support shoulder toward the target. Bring your strong arm to the bottom of your rib cage and hold your arm, right behind the wrist, against your torso.

This stance keeps you from being disarmed by an attacker. It’s also acceptable at short-range shooting against large targets.

This is the least accurate of all of the stances on this list. It should only be used for practice or in case of emergencies.

Finally, if your pistol has barrel porting or a muzzle brake, this stance can direct gasses against your body. Don’t use the Retention Stance with such guns!

Not every stance is good for every situation, so you need to practice each stance until you can naturally assume the proper position to deliver fast, accurate fire, no matter where you are.

Related: What Type of Hearing Protection is Best for Shooting? Aiming vs Pointing: Differences in Rifle vs Shotgun Shooting What Type of Hearing Protection is Best for Shooting? How To Make Homemade Ear Plugs for Shooting