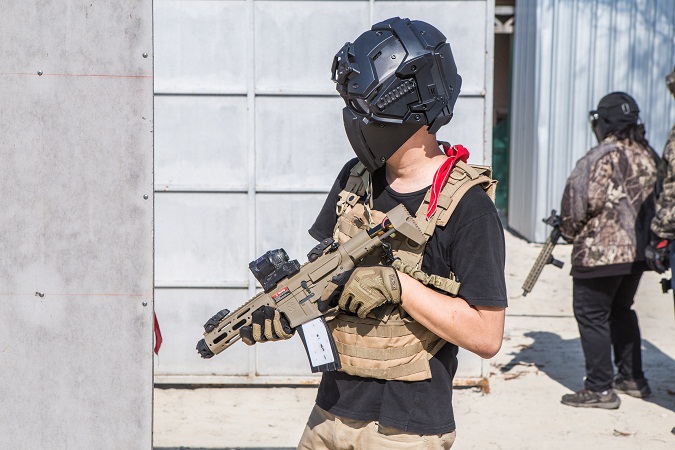 You probably have your kids asking about airsoft guns, which may lead you to ask what the heck an airsoft gun is.

Read on to learn more about these guns and the ways in which they are used.

What Is an Airsoft Gun?

An airsoft gun isn’t exactly a toy, buts it’s not a firearm or an airgun, either. It’s a gun that fires small, close-to-harmless, plastic BBs. They can be battery powered, spring powered, and CO2 powered.

Even the most powerful models are non-lethal. They can occasionally break the skin when used improperly (hence the “mostly harmless” label), and obviously, you can put your eye out with one, kid.

Airsoft itself is a dynamic sport that includes a variety of game types and playstyles. This includes traditional games such as King of the Hill and Capture the Flag, as well as military simulation games that utilize military tactics.

The Benefits of Airsoft Guns: More Than Just Fun Toys

Airsoft can provide a wealth of benefits for your child, as it is more than just a fun way to pass the time. Some of the most important benefits include:

Exercise is one of the biggest benefits for kids playing airsoft.

The sport forces you to run, sprint, jump, dive, bend and flex in all sorts of crazy ways. It gives you a full body workout, and if you aren’t sore the next day you didn’t play hard enough.

Few people realize they are getting such great exercise while playing, and these physical benefits are not the main focus of the sport. This kind of exercise is sneaky and effective.

Most airsoft games are team-based activities that have specific player roles, and those who play as individuals tend to lose. Losing is a painful experience and most people learn quickly that teamwork makes the dream work, as they say.

It also means that teamwork will allow you to finish with a lot fewer welts.

Learning to follow can be a critical skill that many miss out on with other team-based sports. The only way to be an effective leader in any capacity is to learn to follow.

Kids who keep playing the sport will see themselves becoming leaders, and sharpen their leadership skills.

You Can Play Too

Unlike baseball, soccer, football or other youth sports. Airsoft has no age, size, or gender requirements. Since you aren’t tackling or blocking shots your size isn’t an advantage.

In fact, adults are bigger targets. Obviously playing against 10-year-olds isn’t superbly challenging, but it can be quite fun.

You can still play, and have fun and, if you have older kids, you may find it hard to keep up.

Hopefully, after seeing some of the benefits airsoft provides, you may begin considering buying an airsoft gun or two for the kiddos. That’s great, but they need more than just a gun and BBs.

The most important pieces of gear are those related to safety.

Some folks try to get away with just a pair of eyeglasses, which, if you’re an adult, is okay. However, my kids play in nothing short of eye protection and a face mask.

You can purchase a face mask with built-in goggles, or a mesh-mount mask to which you can add your own glasses. Whichever style you choose is fine.

The mouth, nose, and eyes need to be covered and protected. I wear a ball cap as well, just because shots to the head sting like there’s no tomorrow, even though they rarely break the skin.

I also suggest gloves and long sleeve shirts for new players. Since you are often holding your airsoft gun in front of you, you are exposing your hands to fire.

It’s not that hard for BBs at close range to break the thin skin around the knuckles, which is very painful. A long sleeve shirt provides a little extra protection from the BBs.

Additionally, after they have the safety gear you need to have rules set up regarding the minimum safe-engagement distance — 15 feet is typically the Golden Rule.

So, if someone is less than 15 feet from you, you yell “bang bang!” instead of shooting them.

Also, they need to learn a good sign to signal other players that they are out. This will prevent shot players from being shot repeatedly. The standard is to hold your gun over your head and yell “I’m out!” while leaving the play area.

Airsoft Gun Selection: Selecting the Right Model for Your Child

Gun selection can be challenging, and to properly choose a gun you need to consider a few things.

The first thing to consider is the physical size of the child versus the size of the gun.

Some guns are too large and unwieldy for kids, such as sniper rifles and machine guns. They are best avoided for smaller players, and a simple sub-machine gun or airsoft M4 is a better choice.

The next part of airsoft gun selection is going to be based on the child’s maturity level:

If this is the case, you need to consider purchasing a fluorescent colored airsoft gun or a clear one. These are airsoft guns that cannot be mistaken for a real gun by any stretch of the imagination.

Where are they playing? This is another consideration. Are they playing at home, on a stretch of property, or a facility for airsoft? If it’s a local area and someone sees a realistic looking airsoft gun police are likely to get called.

If you aren’t playing well away from the public eye or playing in a facility dedicated to airsoft you should go with the clear or fluorescent airsoft guns.

Airsoft Guns Are Safe and Fun

For some the word “gun” in a kid’s gift that’s doesn’t have the word squirt anywhere near it is intimidating.

However, rest assured, airsoft is a popular and growing sport made up of nice and normal people. It’s a thrilling, team-based sport that is nowhere near as dangerous as something like football.

If your kids are interested in airsoft it’s easy to get started and get involved. Just always remember the safety component, and to exercise a little common sense.